A new skyscraper is set to be built in Dubai – the tallest ever constructed.

The Dubai Creek Tower is set to fully eclipse the Burj Khalifa which itself is in the city. Dutch multinational company Fugro has completed testing for the 928-metre structure to be constructed by Emaar Properties and will be located in the Dubai Creek Harbour complex, standing at around 100 metres (322 feet) taller than the 828-metre (2,717 foot) Burj Khalifa.

Dubai already holds the record for the world’s largest building and has done since 2010 yet this new construction will eclipse that record as the city continues to expand at a rapid pace.

The city’s transformation has become famous worldwide and this new building shows investment has no signs of slowing down. Emaar Properties released some photos last year which showed parts of the tower’s 236-foot-deep foundations, which will be topped with as much as 1.59 million cubic feet of concrete. 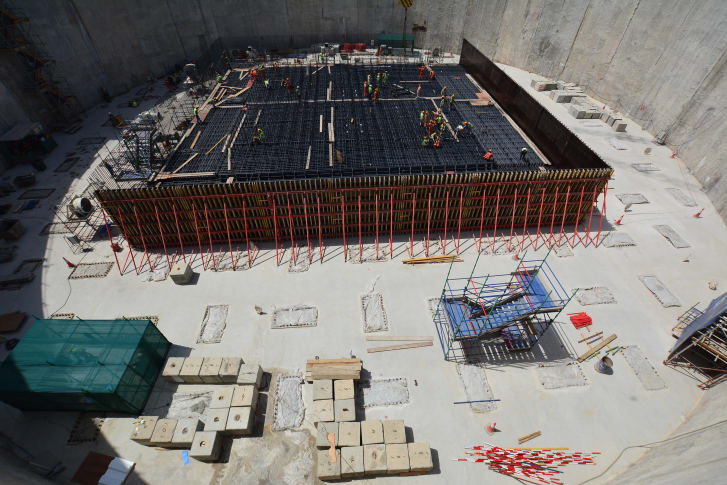 Initial reports have suggested that the building could be completed by the Dubai Expo in 2020, showcasing the sheer speed at which buildings in the U.A.E are constructed. All the testing and monitoring for the foundations for the tower was completed between June 2016 and August 2017 and the tower will have a centralised concrete column which will be supported by a huge network of steel cables.

“Fugro carried out one of the most comprehensive geotechnical investigations in the region. We then tested the in-situ performance of the proposed foundations in order to optimise the final design of the core and the cable anchorage foundation design,” said Joyshwin Sumputh, the service line manager for Fugro.

“This is probably one of the most challenging and demanding buildings under construction in the world,” said Vincent Leblois, the project manager for Soletanche Bachy. Emaar Properties have described the tower as a monument to the world and that the tower was inspired by traditional minarets and lily flowers.

The job of designing the tower was given to Swiss-Spanish designer Santiago Calatrava who decided that the tower would emit a beam of sunlight every day after the sun sets.

If the tower is to be completed by 2020 it would really show the building power the country has behind it and they will once again break their own world record for world’s largest tower.