The vacancy rate in the Salford Quays offices submarket has continued its downward trend since 2015, helping average rents to recover in recent quarters according to leading research company CoStar.

Analysis published yesterday explains that large-scale development of MediaCity and Soapworks meant that supply far outweighed demand in Salford Quays during 2010–14, causing vacancies to be among the highest in the Manchester market and rental rates to fall.

The analysis also found that net absorption has recovered notably since, bolstered by significant take up from companies including TalkTalk (100,900 sq ft), the Home Office (56,000 sq ft), and AJ Bell (94,000 sq ft). This has set the vacancy rate on a downward trajectory and supported the return of average rental growth. 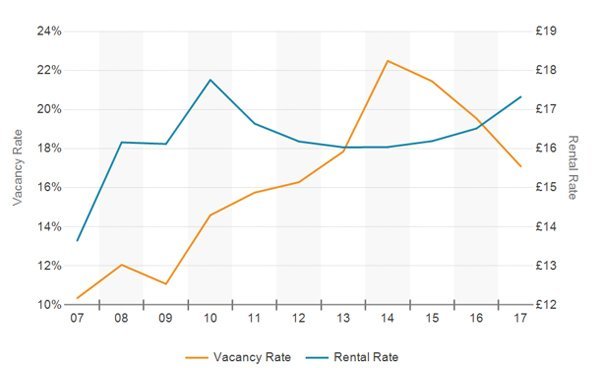 Demand for office space in the Quays looks set to continue in 2018, with BUPA due to take occupation of its new 148,500 sq ft headquarters adjacent to its current office at Erie Basin and Kellogg’s moving its UK headquarters from Old Trafford to 48,500 sq ft at MediaCityUK.

MediaCityUK is now home to over 200 businesses, including the BBC and ITV, Exchange Quay. Elsewhere in Salford Quays, in September 2017 American private equity group Carlyle sold the 400,000 sq ft Soapworks development to the Greater Manchester Property Venture Fund, for £60m. The first two phases, totalling 230,000 sq ft, are now fully let. The 230,000 sq ft refurbishment and redevelopment completed in 2014. The largest occupiers are TalkTalk and the Home Office. Rents average £16.50/sq ft, and the annual rental income is £4m.

Cllr Kieran Quinn, chair of Greater Manchester Pension Fund, said: “For some time I have been in no doubt that Local Government Pension Schemes have a vital role in driving economic growth through investment.

“As the largest local government pension fund in the country, the Greater Manchester Pension Fund has a proud history of investing in both Greater Manchester and the North West through projects such as Matrix Homes and One St Peter’s. I’m delighted that we’re continuing to deliver on that goal with the purchase of the Soapworks development.

“I look forward to seeing this iconic development come to life. This innovative and prestigious scheme will attract businesses and support economic growth in Salford and the wider Greater Manchester region.”